Milly was born Amelia Grace Walmsley, on 6 November 2003 and weighed a very healthy 7lbs 10 oz. She was little sister to Hannah, who is almost 3 years older. Milly as she was known, grew up healthy, full of fun and mischief, everyone who met Milly was left with a lasting impression of a little girl full of fun who had a great smile. Milly had the usual childhood illnesses, chicken pox, colds etc., but nothing out of the ordinary. In Autumn 2014, she started her final term – year 6 at St Huberts RC Primary School in Great Harwood, she was very proud as she got to wear a shirt and tie and felt very grown up.

A few weeks into this term, Milly started to look very pale, she claimed that she felt ok and didn’t want to go to the doctors. We initially thought she was tired due to a new term at school and thought it was possibly a virus. However, she remained very pale and we took her to Accrington Victoria Hospital where she had a temperature of 40ºC, but no other symptoms. We then went to Royal Blackburn Hospital who did bloods and when we got the results our lives were changed forever. We were told Milly had leukaemia, and that we were to go to Ward 84 Royal Manchester Children’s Hospital for admission. We were transferred later the following day by ambulance.

We were all devastated and had no idea of what lay ahead. We arrived on Ward 84 on Thursday 13 November 2014, we were shown around the ward and told we would be there for quite a long period. The following day Milly underwent numerous tests, including a trip to theatre where a Hickman Line was inserted, a bone marrow biopsy was done as was a lumbar puncture too, she was also given chemotherapy into her spinal fluid too. All this and she continued to smile! This was so far out of our comfort zone and not how our lives were meant to be, but it was amazing how quickly it became normal for us.

Milly was officially diagnosed with AML – Acute Myeloid Leukaemia, which meant 4 cycles of intense chemotherapy over the next 6 months. However, things did not always go to plan, the first lot of chemo did not work and the leukaemia was still very much present, so the next cycle was much more intense and hit Milly very hard. This was given over the Christmas period, and Milly experienced severe sickness, high temperatures, sore mouth (mucositus) and was very unwell. The Consultant initially thought this hadn’t worked and talk turned to an emergency bone marrow transplant. However Milly slowly improved over the following days, her blood counts came up, she began to eat and drink and cause chaos on the ward. We were even allowed home for a week which was amazing and gave Milly a little bit of normality, and the chance to visit school and catch up with friends, we were so appreciative of this time. Then further tests were done, more bone marrow samples – which involved a general anaesthetic each time – but Milly was doing well and the leukaemia was in remission.

The plan was to give a third dose of chemotherapy and then Milly would move to the bone marrow unit for a much more intense chemotherapy than she had had before, and then a bone marrow transplant. Milly was isolated for 6 weeks during this time, in a room where she was only allowed 3 named visitors. This time was hard, Milly was very sick, and required morphine and ketamine to control the severe side effects from the chemotherapy. However, once she had received her stem cells, we knew that she was going to get better and get her life back. The transplant was done on 20th March 2015 and 4 weeks later Milly rang the end of treatment bell and was discharged home. We were elated, life was good, everyday prayers were said to thank god for getting Milly better, for the amazing donation of stem cells from an unknown donor, we had never felt more positive and happy. 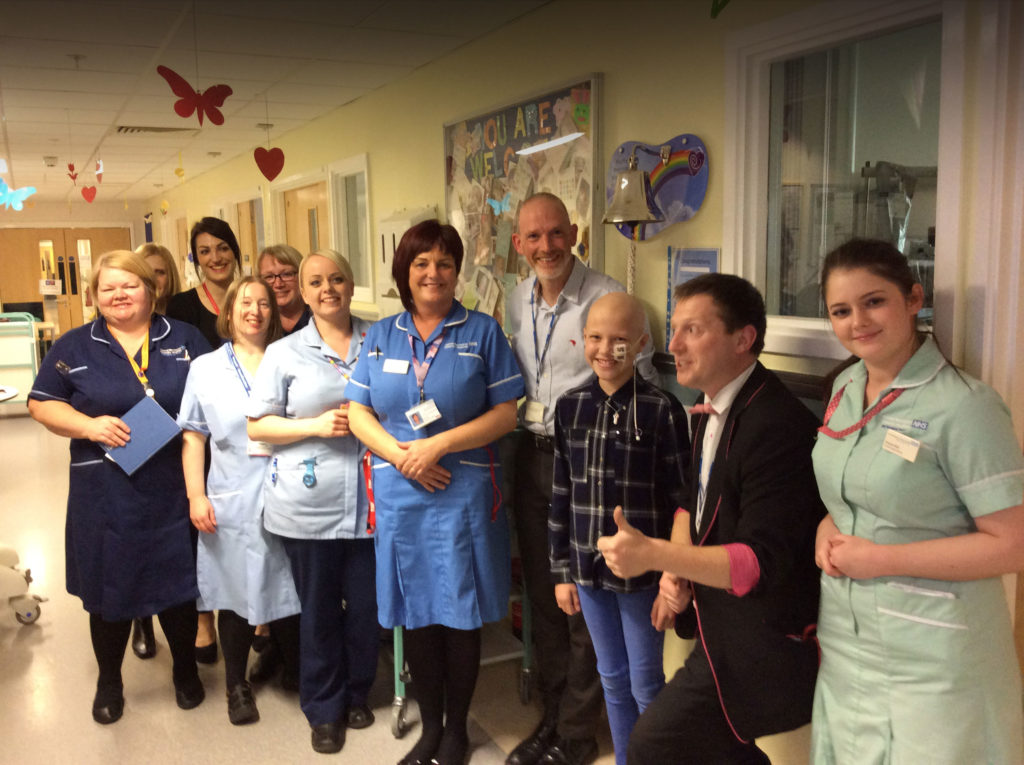 We visited the clinic every week and there were a few hiccups along the way, but all were controlled with medication. We carried on planning our future as a family of 4, Milly was to start St Augustine’s RC School, in September and we were on track for this. Meetings had been had with the school and they were aware of Milly’s health needs and were looking forward to her starting with them. Milly attended a taster day at the school with all her friends, she smiled from start to finish, she was so happy to be there with her friends being ‘normal’, and I was so proud of her as I dropped her off that morning, a total inspiration to many many people.

In the June of 2015, Milly’s platelet count starting dropping, so a bone marrow biopsy was done as an outpatient and we came home. That evening we all went to St Augustine’s, as the future year 7 pupils were finding out which form they were in, and they could buy items that would be needed for school. Milly loved it, however when we got home we had a message to call Milly’s consultant – the leukaemia was back – 1st July 2015.

July 3rd we took Milly and Hannah to London for an amazing weekend, courtesy of fundraising done. We had a fantastic time, Milly loved it and decided she would live there for a few years when she got older. 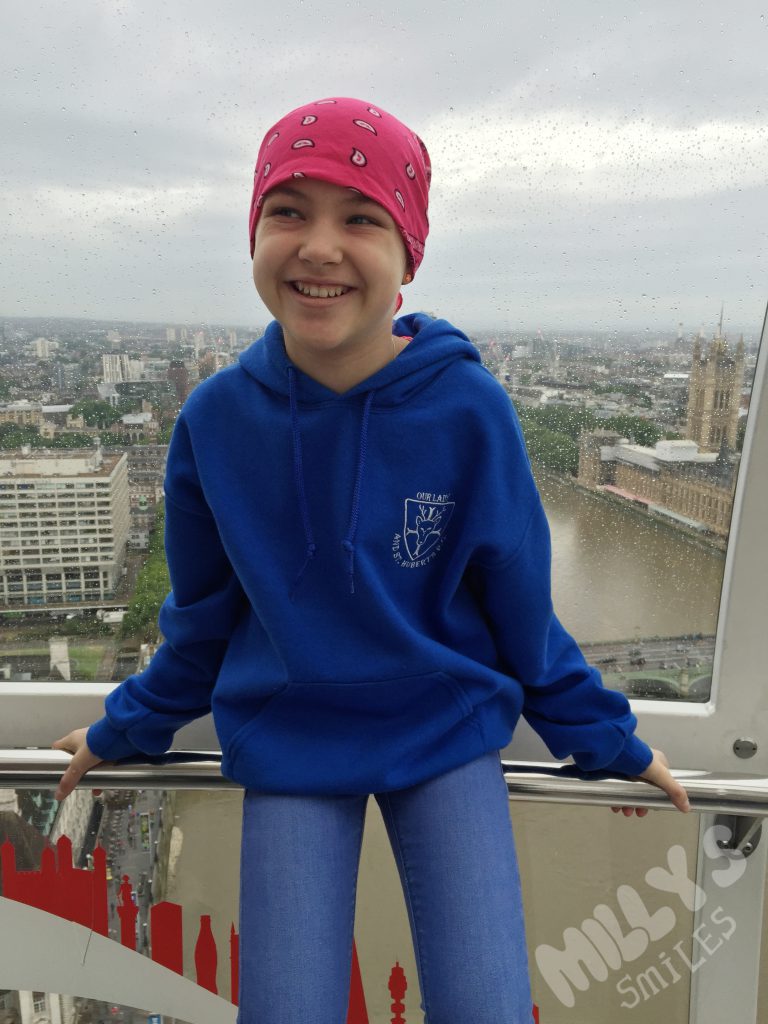 July 6th we were told Milly would need more chemo and 2nd bone marrow transplant, we were relieved that we were offered further treatment as we were not ready to give up on Milly yet, and Milly herself said she was fighting this and it was not going to beat her as she had too much to do.

July 15th Milly attended her school leavers disco with all her friends, a stretched limousine was hired to take them, and afterwards Milly told me it had been her best night ever. 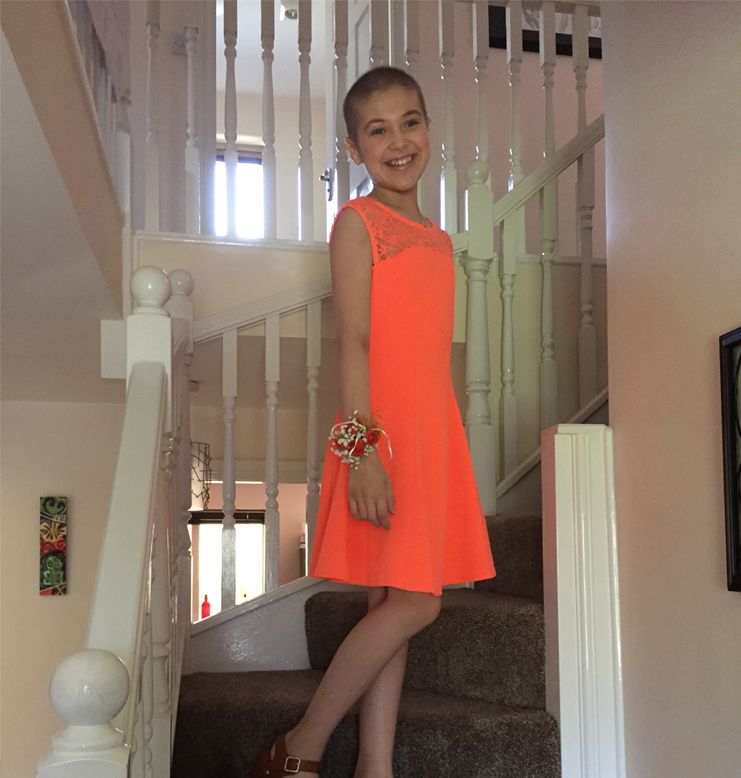 The following day July 16th Milly was re-admitted to Royal Manchester Children’s Hospital, to have a new Hickman line inserted and then on July 17th Milly started 5 days of chemo.

Milly got several infections during her treatment, her line became infected and had to be taken out and a new one put in, she was constantly on antibiotics, she developed a chest infection and became generally weak physically. She was unable to eat and had several NG tubes inserted, although she was often sick so they would come out and she would need a replacement one, she finally refused to have any more as she was fed up of the whole cycle of losing them and needing replacements.

Milly deteriorated during this time, she lost weight and on September 3rd we were officially told that they were unable to offer any further treatment for Milly and to take her home and love her.

September 20th 9.26am Milly sadly passed away with her family beside her.